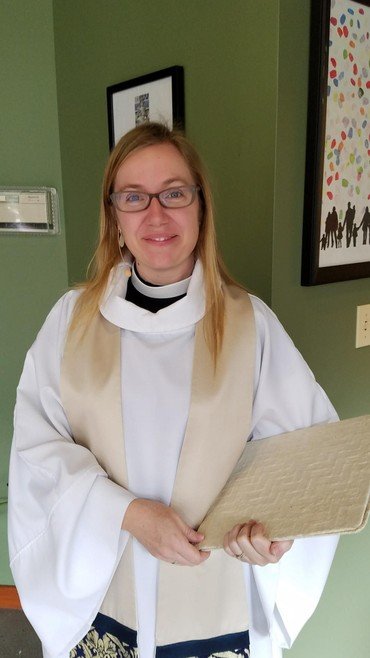 The Rev. Alissa Newton became Vicar of St. Columba's on August 3, 2014. Alissa grew up in Northern California and moved to the Pacific Northwest to attend Seattle Pacific University in 1996, where in the course of her undergraduate career she found and fell in love with the Episcopal Church. After completing her BA in Religious Studies at SPU, Alissa worked as a research interviewer for Washington State's Department of Social and Health Services and spent her free time playing the drums for an all-female rock band she formed with friends.

Alissa married her husband Andrew, a native of Poulsbo, WA, in 2005. They have two daughters, ages 6 and 8, a black lab, two guinea pigs and a tank full of fancy guppies. Alissa and her family live in Des Moines, WA. In her free time, Alissa loves to spend time with her family, read geeky fiction, play the drums, and grow dahlias. 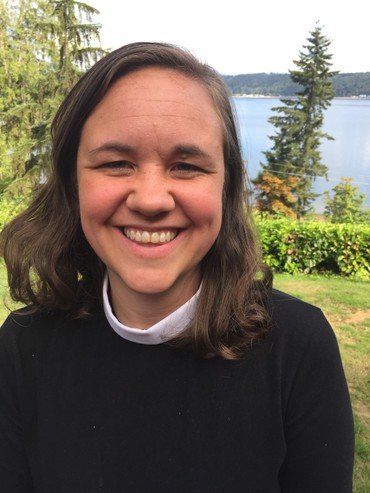 The Rev. Meghan Mullarkey became Associate Vicar of St. Columba's in January 2019. Meghan grew up in Northern Virginia and moved to the Pacific NW in 2007 to work at a teen homeless shelter.  She began seminary at the Seattle School of Theology and Psychology in 2008 and found a home in the Episcopal Church in 2009.  She began the discernment process to the priesthood shortly after and has worked at numerous churches within the diocese doing pastoral care, youth work, and adminstrative work.  She was ordained to the priesthood in July 2017.  She completed her curacy at St. Andrew's, Tacoma in January 2019 before beginning at St. Columba's.

Meghan met her husband, Luke, in graduate school where he was pursing his Master's in Counseling.  They were married in 2013 and moved from Seattle to Tacoma in 2016.  They have two small children.  Meghan loves exploring the Pacific NW; going on long walks with Luke,  the kids, and their dog (Scout); and participating in the intersection of listening and God’s healing work in the world. 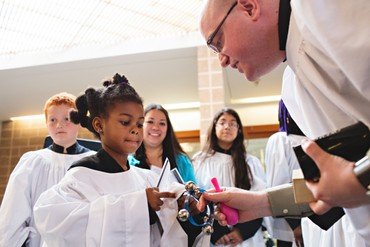 Martin has been singing at churches almost as long as he can remember, and has interned or worked in congregations ofseveral demonations: Baptist, Lutheran, and charismatic. He has been a professional in the Episcopal church for nearly twenty years. several of those as music director at Episcopal congregations in Tempe, Arizona and Sammamish, Washington.

He has performed with numerous wind and choral ensembles, including the choirs of Trinity Episcopal Cathedral, All Saints' Episcopal Church, and the Phoenix Symphony Chorus, and on the euphonium (a brass instrument similar to a small tuba) with the Phoenix Metropolitan Philharmonic, Phoenix Concert Band, and the Rainbow City Band of Seattle.

When not at St. Columba's you can find Martin working (feverishly) to complete his Master of Divinty degree at Vancouver School of Theology in Vancouver, British Columba. 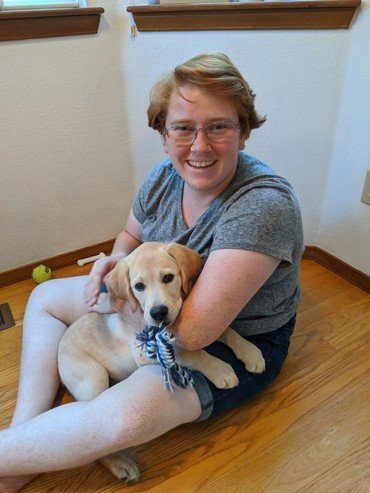 Elaine Ogden is the Director of Children, Youth, & Family Ministries at St. Columba's, as well as our Social Media Manager. First introduced to the Episcopal tradition in 7th grade, Elaine has a passion for Children, Youth, and Family Ministry, having experienced first hand the positive impact a supportive church community can have on a young person's life. While in college, Elaine volunteered with local Episcopal churches as a Sunday School Teacher for middle schoolers. What started as a way of paying forward the love and care she got from the church as a young person, turned into a way of life for Elaine, as she recieved her Certificate for Youth & Family Ministry from FORMA: The Network for Christian Formation in 2015. Elaine is also certified as a Storyteller for Godly Play, a trainer for the Safe Church Program,  and a graduate of and an Intern for the Diocese of Olympia's College for Congregational Development.

When she's not working at St. Columba's, off on an adventure with our Youth, or leading a training, Elaine enjoys spending time with her loved ones, singing, gardening, walking her dogs, playing video games, and raising her kids.